Jack is a soldier struggling to find a reason to live in the post-apocalyptic nightmare he's inherited where Neanderthal-like creatures – human corpses reanimated by the Okamura Virus – dominate the world.  When he gets infected by one of these zombie-like monstrosities after a botched rescue mission, he must face the last person in the world he actually cares about and fight for his life against his brothers-in-arms as well as a vengeful mutant abomination. 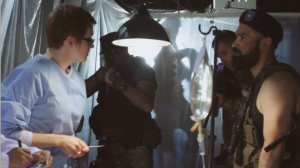 Meanwhile, Doc Johnson, with the understanding that the Okamura Virus possesses a second phase that regenerates both flesh and brain function, lets her ethics fall to the wayside as she becomes increasingly obsessed with her research, which puts her at odds with the military leader of their group.